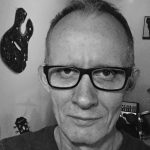 Enactive Virtuality Lab’s consulting collaborator, professor Bruce Sheridan is a filmmaker and educator based in Chicago. He began his filmmaking career in New Zealand, where he produced and directed drama and non-fiction projects for cinema and television, and won the 1999 Best Drama Award for the tele-feature Lawless. From 2001-2017 he was Chair of Cinema Art + Science at Columbia College Chicago, where he led the creation of the Media Production Center, a unique laboratory for modeling and investigating professional collaborative filmmaking practice. Professor Sheridan is Chair of the North American region of CILECT, the international organization of screen education institutions, and a member of the Creativity Research Initiative team at the University of Auckland, New Zealand, where he is currently completing his PhD in philosophy.