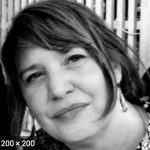 Marie-Laure Cazin is filmmaker and a researcher.  She is teaching in Ecole Supérieure d’Art et de Design-TALM in France. She was a postdoctoral researcher at MEDIT BFM, Tallinn University with a European post doctoral grant Mobilitas + in 2022-23. She received a PhD in Aix-Marseille University for her thesis entitled “Cinema et Neurosciences, du Cinéma Émotif à Emotive VR”[1] in 2020. This thesis is about cinema experience, contextualized by neurosciences research, describing the neuronal process of emotions and trying to think further about the analogy between cinema and the thinking process. She is also a regular teacher in the Ecole Supérieure d’Art et de Design TALM, le Mans (France).

She comes from an artistic background, having studied in Le Fresnoy, Studio National des Arts Contemporains, the Jan van Eyck Academy, post graduate program in residency (Masstricht, Netherlands) and in the Ecole Nationale Supérieure des Beaux-Arts in Paris. She has conducted many art-science projects together with scientific partners that have been shown in many exhibitions and festivals, creating prototypes that renew the filmic experience.

In her latest projects, she works with physiological feedback, like EEG, in order to obtain an emotional analysis from the brains’ activity of the viewers that changes the film’s scenario, Emotive Cinema, 2014. With Emotive VR Cinema project, she is attempting to obtain this emotional feedback in the VR context, with her neuro-interactive VR 360° filmic experience, “Freud’s Last Hypnosis”, where the emotional state of the viewer changes the film’s interactive music composed by Mathias Harju.https://www.linkedin.com/in/marie-laure-cazin-7122b7183/