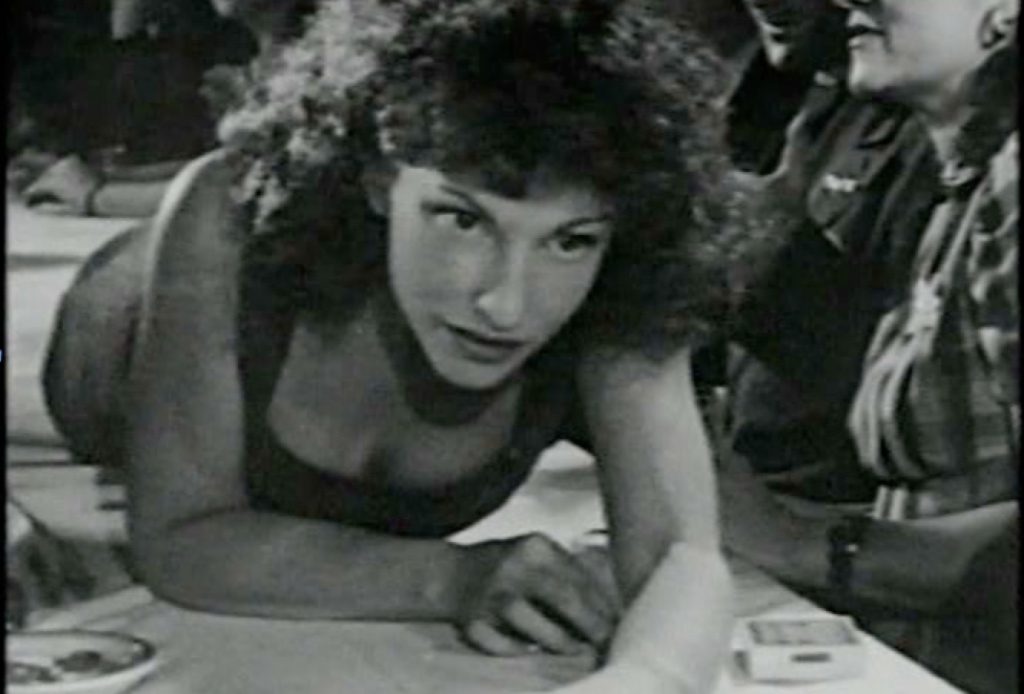 The film that all subjects viewed in fMRI and in MEG brain scanning labs at Aalto University  was At Land from 1944 by Maya Deren. I suggested this experimental film for our brain imaging studies due to its special characteristics.

“The dancer, choreographer, and filmmaker Maya Deren can be seen as one of the pioneers of screendance. Her experimental films have challenged conventional plot- driven mainstream cinema by emphasizing an ambiguous experience, open for multiple interpretations. For Deren film viewing is a socially determined ritual embodying intersubjectively shared experiences of participants. This makes her films particularly interesting for today’s neurocinematic studies. Deren’s ideas also anticipate the recent enactive mind approach, according to which the body-brain system is in an inseparable manner situated and coupled with the world through interaction. It assumes that both private, such as perception and cognition, and intersubjective aspects of human enactment, such as culture, sciences, or the arts, are based on the embodiment of life experience. Reflecting this discourse, Deren’s film At Land is analyzed as an expression of a human body-brain system situated and enactive within the world, with references to neuroscience, neurocinematic studies, and screendance” (Tikka & Kaipainen 2016).

Read more of the film and why it is of interest to cognitive neuroscience studies here:

One of the challenges of naturalistic neurosciences using movie-viewing experiments is how to interpret ob- served brain activations in relation to the multiplicity of time-locked stimulus features. As previous studies have shown less inter-subject synchronization across viewers of random video footage than story-driven films, new methods need to be developed for analysis of less story-driven contents. To optimize the linkage between our fMRI data collected during viewing of a deliberately non-narrative silent film ‘At Land’ by Maya Deren (1944) and its annotated content, we combined the method of elastic-net regularization with the model- driven linear regression and the well-established data-driven independent component analysis (ICA) and inter-subject correlation (ISC) methods.(…)

“In our study, we aimed to go beyond story-driven narratives. What methods could improve the analysis of time-locked interdependence between the brain data and the content of more ambiguous non- narrative films, or video recordings of non-structured events, such as improvised conversation? This question motivated us to study the link- age between our fMRI data collected during viewing of a non-narrative silent film ‘At Land’ directed by Maya Deren (1944, 14′40′′) and its annotated content. The film ‘At Land’ shows an expressionless young woman wandering in her surroundings without any explicit motivation for her behavior, such as collecting stones in the beach, or jumping down from a rock. In addition, according to the director-actress herself, she deliberately avoided emotional expressions, while the cinemato- graphic aspects, such as camera movements and framing, have been carefully composed (Deren, 2005). How to link the cinematic features of such an ambiguous film with the viewers’ brain activation detected while they are trying to make sense of it? As the film ‘At Land’ does not give any tools for inferring the character’s mental state, goals of her actions, or inner reasons, story-based film structure analysis methods do not necessarily allow adequate interpretation for the resulting linkages. Instead, by annotating all bodily actions and camera-related features specifically pointed out by the director of the film, one might find meaningful linkages between the film content and collected fMRI data”(Kauttonen et al 2016).

Observation of another person’s actions and feelings activates brain areas that support similar functions in the observer, thereby facilitating inferences about the other’s mental and bodily states. In real life, events eliciting this kind of vicarious brain activations are intermingled with other complex, ever-changing stimuli in the environment. One practical approach to study the neural underpinnings of real-life vicarious perception is to image brain activity during movie viewing. Here the goal was to find out how observed haptic events in a silent movie would affect the spectator’s sensorimotor cortex. (…)

Another article that harnessed our data collected when people watched At Land by Deren (1944):

Movie-viewing allows human perception and cognition to be studied in complex, real-life-like situations in a brain-imaging laboratory. Previous studies with functional magnetic resonance imaging (fMRI) and with magneto- and electroencephalography (MEG/EEG) have demonstrated consistent temporal dynamics of brain activity across movie viewers. However, little is known about the similarities and differences of fMRI and MEG/EEG dynamics during such naturalistic situations. (…)

Below Fig. 6. Time courses of the most similar MEG and fMRI signals.